Today, convection reflow soldering is the preferred joining technique in the surface mounting of electronic assemblies worldwide. Combined with component development, it alone is able to guarantee the unstoppable and increasing integration density in mobile devices.

Today, convection reflow soldering is the preferred joining technique in the surface mounting of electronic assemblies worldwide. Combined with component development, it alone is able to guarantee the unstoppable and increasing integration density in mobile devices. But even in classic areas such as power electronics, THT components are increasingly being transformed towards the world of surface mount technology (SMT).

One challenge of the SMT solder joints are referred to as voids – gas inclusions which form in the solder joints when the solder paste is remelted. Depending on size and position, they reduce the cross-section of the joint which leads to a considerable reduction in heat dissipation in the case of BTC power semiconductors or LEDs, for example. As a result, there is a risk of the component being thermally overloaded which in the worst case leads to component failure. Even with an apparently low porosity of three to five percent, the heat dissipation is influenced in such a way that the thermal resistance increases and causes ‘hot spots’. To prevent this, it is imperative to reduce the void rate in the solder joints to an absolute minimum and thus ensure a low, reproducible level in series production.

System supplier Ersa is responding to the increasing demand for low-void joints in electronics production, above all in power electronics, with the EXOS 10/26, a vacuum reflow soldering system with eleven conventional heating zones (at the top and bottom), three heating circuits for the vacuum chamber and four cooling zones (top and bottom). The vacuum chamber is part of the peak process area with which the void rate can be reduced by almost 100% (depending on paste, component and printed circuit board).

For its new EXOS, Ersa relies on well-proven technologies (such as heating and cooling zones or the intuitive, prize-winning ERASOFT 5 interface) which are used in the models of the Ersa HOTFLOW family. The reflow soldering systems were introduced to the market over 30 years ago and have since set the industry standard. “For us, the EXOS 10/26 is the consistent and logical addition to our successful HOTFLOW reflow soldering systems – the EXOS is based 100 percent on the successful Ersa DNA and stands out against the next generation in significant points. Consequently, our new reflow soldering system uses well-proven technology so that our customers also receive the familiar Ersa quality with this soldering system,” says Jürgen Friedrich, Head of Process Technology at Ersa. The reflow soldering system with vacuum module will be presented for the first time at productronica in Munich from 12 to 15 November 2019. Thanks to intelligent features, it is possible with this system to produce void-free in a particularly cost-efficient way. For example, for an LED module produced on the Ersa EXOS 10/26, the void rate can be reduced from 8.5 percent (largest single void: 2.2%) to an impressive 0.5 percent (largest single void: 0.3%). In addition to extraordinary process reliability, the system impresses with its extreme ease of maintenance and accessibility of the individual components which demonstrably provide the customer with calculable added value.

Well thought-out and innovative handling of the printed circuit boards in the infeed segment and transfers from and to the vacuum chamber set the system apart from competitors in this segment. For energy-efficient cooling, three expansion stages are available for the EXOS (a maximum of four cooling zones top and bottom) so that optimum cooling gradients can be set in each case for all requirements.

The EXOS scores in the vacuum module with its lubricant-free roller transport. Dual track transport for double the productivity is also available as an option

The complete vacuum unit is equipped with quick-release fasteners and mounted on a movable module, which can be removed from the system quickly and easily

The vacuum chamber is heated by heating control circuits, in the chamber cover and in the chamber base. They can be set individually within certain permissible temperature ranges. In addition, the vacuum chamber has a self-sufficient, medium-wave radiant heating system which offers various advantages. The vacuum chamber is basically a very large thermal mass which, on the one hand, guarantees thermal stability during the soldering and vacuum process but, on the other hand, makes it more difficult to change the temperature level in this area. For example, with the help of the heating control circuits in the chamber base and chamber cover, a basic energy level can be created and in addition the profile is realized with the medium-wave heater. When changing the profile, only the medium-wave heater can be adjusted, thus significantly shortening the changeover times. Furthermore, it is generally possible to work with a lower temperature level in the chamber cover and chamber base, which goes a considerable way towards extending the service life of all the components present in this area such as bearings, seals and welds. The solution described offers maximum flexibility in profile design. As with all newly designed components, Ersa engineers designed the heating system with the best possible combination of functionality, process stability and service life in mind. Customer benefits and generation of added value for the customer are always paramount.

Maximum safety and ease of maintenance in the vacuum module

The vacuum parameters such as the target pressure level and the holding time at target pressure level can be controlled separately and can therefore be integrated into the reflow process for specific assemblies. Transmitted light sensors monitor the inlet and outlet areas of the vacuum chamber and thus ensure maximum process reliability. This ensures that there is no assembly in the movement area of the chamber cover. The sensors for this have been developed specially for the Ersa EXOS vacuum application. The drives for opening and closing the chamber are integrated into the upper part of the process tunnel and as a result are easily accessible for maintenance work.

The entire vacuum unit with pump, filters and valves was mostly integrated into the EXOS machine frame so that the additional footprint is very small (less than 2 m²). Maintenance work can be carried out conveniently outside the electronics production area because the complete unit is mounted on a separate, mobile module which can easily be removed from the system thanks to quick-release fasteners. Downtimes are thus reduced to the absolute minimum and machine availability is increased enormously because all components can be reached quickly and conveniently in this way.

Another feature of the modular EXOS is the transport system which is divided into four segments. Infeed, pre-heating zone with peak zone, vacuum module and cooling zone each has its own transport. Due to the separate transport in the infeed area, there is no need for an external input module. The optional dual track transport (for printed circuit board formats up to 400 x280 mm) enables maximum throughput with optimum PCB guidance, perfect synchronization and ideal transitions. The integrated infeed module ensures simultaneous loading of the EXOS with assemblies on both tracks so that they arrive in the vacuum chamber at the same time. Thanks to the dynamic transport speed in the cooling module, the assemblies leave the system at an even lower temperature, eliminating waiting times for further processing. Different chain types are available for transport, so that different requirements for edge support and weight of the assemblies can be implemented.

Highest assembly quality and machine availability thanks to roller transport

The vacuum chamber is equipped with a stable, easily exchangeable roller transport system that does not require lubricants. Thus, on the one hand an extremely low-maintenance method of transport was chosen, on the other hand there is no danger of lubricant deposition on the assembly during the vacuum process.

Ersa EXOS provides the perfect answer when vacuum reflow soldering requires a significant increase in the reliability of solder joints due to minimum void rates combined with greater system flexibility! 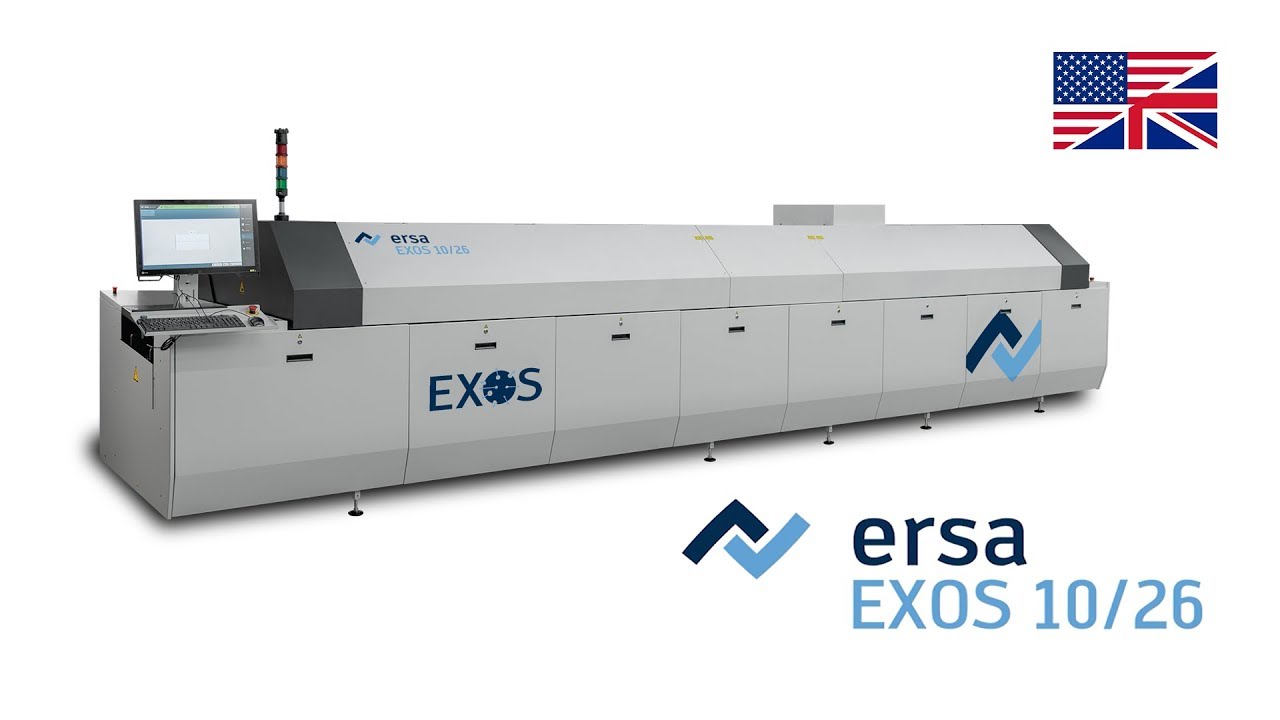 You may also be interested in the following topics

The Ersa Technology Seminar “Design for Manufacturing” was a valuable transfer of know-how to the 58 participants from Germany, Austria and Switzerland. During the two days, topics such as CAD design, LP technology, components and production processes were covered.

Many advantages of selective soldering are based on the wettable surface of the solder nozzles in combination with the freely programmable time-path control of the solder wave, which can be used to positively influence the solder peel-off, e.g. to effectively prevent solder bridge formation. The wettability of the nozzle surface is based on the chemical …

All good things come in 3D!

The most important trade show for the electronic production industry takes place only every two years. Each time, Productronica in Munich is the stage where new technical solutions are presented – it is indeed the ideal setting to present innovations to a large audience of specialists.